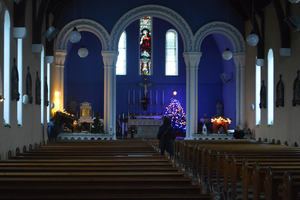 The winter wind on Achill Island began to carry a soft Irish rain, so we ducked inside the nearest church.

The weathered stone building was cool, but dry, and that special kind of quiet I’ve only ever found in empty churches. The tall arched windows let in a gentle gray light, and we spoke in hushed voices even though we were the only ones there.

“Wow,” my mom said quietly, almost to herself, as she wandered up and down the aisles. “Just think, Great-Grandma could have gone to Mass here.”

She probably didn’t. But she could have, and that’s what mattered.

Originally published by Jack Rooney ’16 at international.nd.edu on February 20, 2018.