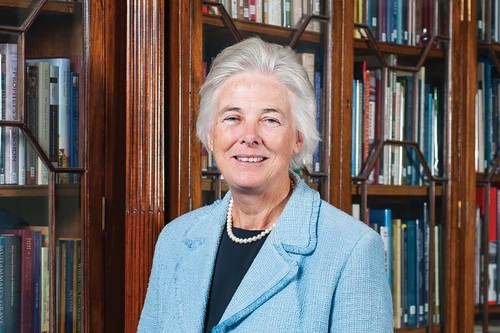 Catherine Day, former Secretary-General of the European Commission, will deliver the Barrett Family Lecture in Dublin, Ireland on Wednesday, April 18th, 2018. She will present her lecture, entitled “Will the EU Survive Brexit?” at the Notre Dame-Newman Center for Faith and Reason. The lecture, which is organized by the Nanovic Institute for European Studies at the University of Notre Dame, is free and open to the public.

The Barrett Family Lecture Series was established through the generous support of R. Stephen and Ruth Barrett. The initiative brings prominent leaders in the areas of business, politics, and the arts to the Notre Dame Dublin Global Gateway to share their views on issues of major importance to the understanding of contemporary Europe with Notre Dame students and the wider community.

A. James McAdams, the director of the Nanovic Institute, emphasized how fortunate Notre Dame is to have Catherine Day presenting the Barrett Family Lecture. “As someone who has spent nearly her entire career working for the European Commission,” he said, “Ms. Day is uniquely positioned to enrich our understanding of contemporary Europe. Like few other authorities, she has the experience to provide a nuanced perspective of the many challenges and uncertainties currently faced by the European Union.”

Day began working for the European Commission in 1979 and served in the cabinets of three consecutive commissioners. In 2005, she was appointed Secretary-General—the top civil-servant position in the European Commission—by President José Manuel Barroso. She remained in the position until 2015 under Barroso’s successor, Jean-Claude Juncker, whom she continues to support as Special Adviser. She was the first woman to hold the position of Secretary-General.

Known by colleagues as “Catherine Day and Night” because of her tireless devotion to her work, Day’s accomplishments with the European Commission are numerous. Among many other initiatives, she played a pivotal role in the EU’s post-2004 enlargements, helped craft the Commission’s policies on chemical substances and renewable energy, and was a key negotiator in the development of the EU’s 2014-2020 budget. For her exemplary service, she was awarded the President of Ireland Distinguished Service Award and the Garrett Fitzgerald Gold Medal for International Relations.

Her lecture will be the second in the Barrett Family Lecture Series. The inaugural lecture was given by Peter Sutherland, former Director-General of the World Trade Organization and Chairman of Goldman Sachs International. Day served on Sutherland’s cabinet when he was European Commissioner of Competition.

The Nanovic Institute for European Studies at the University of Notre Dame is committed to enriching the intellectual culture of Notre Dame by creating an integrated, interdisciplinary home for students and faculty to explore the evolving ideas, cultures, beliefs and institutions that shape Europe today. The institute is an integral part of Notre Dame’s Keough School of Global Affairs.

For additional information about the Nanovic Institute and the Barrett Family Lecture Series, visit nanovic.nd.edu or contact nanovic@nd.edu.

Originally published by Kristian Olsen at nanovic.nd.edu on April 05, 2018.